Skip to main content
To provide you with the best experience, Union Bluff Hotel uses its own and third-party cookies on its website for technical, analytical and marketing purposes. By continuing to browse our site, you're agreeing to our use of cookies. Please consult our Cookie Notice for more information.

History of the Union Bluff

The area around the Hotel was once part of Cape Neddick, however the explosion of tourism after 1865 created the community now known as York Beach. During the years following the Civil War, prosperity reigned and improved transportation changed people's vacation habits. People flocked to York Beach by stagecoach, horse drawn carriage and eventually by steam train and electric trolley. Many Hotels and guest houses were open and guests arrived for a months' stay in the summer. The Union Bluffs was lined with hotels and cottages. Tourists came to "take in the sea air" and "go bathing every day."

In the early 1900's the Union Bluff House, was renamed The Wahnita and offered a "4 Days" stay including round trip travel from Portland, hotel accommodations and shore dinners for $18.00. There were band concerts in the park and the boardwalk along Short Sands was a popular place among overdressed ladies who did not want to get sand in their shoes. 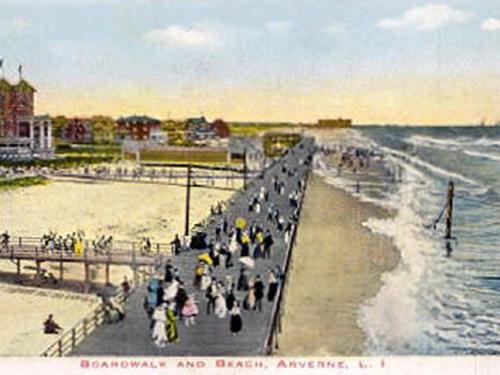 In 1932 David Bowman purchased the hotel and renamed it the York Plaza Hotel. Guests came to stay for one to two months in the summer. The lobby was on the 2nd floor and many guests enjoyed sitting on the porch overlooking the beach. Rooms were located on the 3rd floor and there was a pulley system to hoist trunks up to that level. The hotel had a huge dining room where all meals were served. As was the custom in those days, all meals were included. Mr. Bowman sold the Hotel in 1954 for $25,000.

The Union Bluff has changed names with different owners over the years:

It was sometimes also referred to as The Driftwood by locals because of its popular lounge of that name. The Hotel has basically remained the same over the years with only a change in appearance in the early 1900's when a second tower was added to the end of the Hotel closest to the Fairmont Hotel and the central peaked dormer was replaced with a square tower.